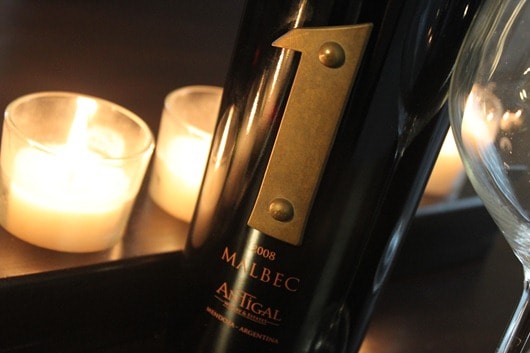 I‘ve had a couple of requests for more Malbec reviews, so here you go…

In a clever piece of marketing, Bodega Antigal have decided upon strapping a big copper “1” to the front of the bottle! Don’t knock it! It made me notice the bottle on the shelf!

Over the last couple of years, Malbec sales have exploded in the U.S., with Nielsen reporting a 60 percent growth between January 2009 and January 2010.

The main winery building at Antigal dates to 1897, but has been updated (thankfully) and filled with the latest winemaking technology.

Antigal Winery & Estates was founded in 2000 by the Peiro family, descendants of European immigrants to Argentina. They have been farming Mendoza vineyards for decades before they decided to make their own wine. 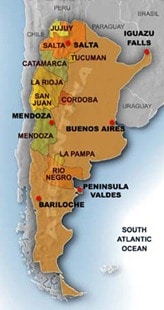 Malbec vines were brought to Mendoza around 1860. There were no native Malbec vines in the region before that date.

Mendoza has a warm dry climate with a relatively low humidity with little rot and few insects or diseases, highly favorable for growing grapes. Most vineyards are at altitudes of 2,800+ ft.

Grapes in Mendoza have some of the longest "hang-times" in the world, which creates balanced wines with ripe fruit.

The growing areas of Mendoza receive less than 10 inches of rain per year, luckily there is plentiful irrigation from year-round snow melt in the Andes.

Due to the high altitude and desert-like climate, vineyards rarely face the problems of insects, fungi, molds, phylloxera, and other diseases that affect grapes in other countries. This means that pesticides and herbicides are rarely needed. Nice to know!

Argentina is the world’s 5th largest wine producer by volume after France, Italy, Spain and the US. It used to be that Argentine winemakers were more interested in quantity than quality, with the country consuming 90% of the wine they produced; however in recent years quality has taken more of a precedent.

The one unfortunate thing about the explosion of Malbec in the U.S. is that there has been a flood of thin and watery Malbec’s on the market. Luckily the Antigal Uno isn’t one of them.

Dark red in color, the nose shows dark black fruit, pepper, spice and leather. A little mocha on the palate with persistent plum and blackberry, oak, and tobacco.
Certainly some tannin and grip, but not overly so. Good now, could be few better with another year or two in the bottle.

Food in Argentina has strong influences from Spain, Italy and France, so bear that in mind when pairing with the Antigal Uno.
Beef served in just about every way you can think of, pork sausage, lamb shank, chorizo,  stews and even blood sausage (if you’re feeling adventurous).

Grapes Cabernet Sauvignon, 55%, Cabernet Franc 15%, Malbec 15%, Merlot 10%, Petit Verdot 5% Facts Fusion V is named after the blend of only the best of the five red Bordeaux grapes. You would therefore refer to this wine as a “Bordeaux Blend”. Currently, vineyards in South Africa are undergoing a large-scale replanting program. With this, South Africa winemakers have collectively decided to focus on the five international grape varieties (Cab, Cab Franc, Merlot, Malbec…