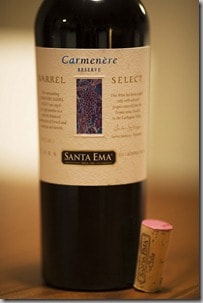 Vine clippings of Cabernet and Merlot were taken to South America in the 1800’s, in order to plant new vineyards and avoid the grape vine plague Phylloxera [Fill-lock-seh-rah] which was hitting Europe and almost wiped out their  vineyards. What they didn’t know was that Carménère had accidentally been mixed in amongst the cuttings. It wasn’t until as late as 1994 when a French ampelographer (identifies and classifies grapevines for a living) discovered that what the Chileans thought was Merlot (and were labeling their wines as) was actually Carménère!

The Santa Ema Carménère is often rated highly in the “Best Buy” category for magazines such as Wine Spectator and Wine Enthusiast. The Santa Ema winery was established in 1917 by Italian immigrant Pedro Pavone-Voglino.

Make sure you check-out some of the other wines from Santa Ema, including their Amplus One, an intense Carménère, Syrah, Carignan blend with great potential for aging.

The Maipo region was planted in the 1800’s by the wealthy families of Chile as status symbols.

It is said that smog and dust from nearby the city of Santiago, is the largest detrimental factor to the vineyards of Maipo. This is a double-edged sword for Chile, as it’s close proximity to such a large city, enables the wines to reach the International market faster.

Most of the vineyards planted in Maipo are red grape vines, mainly Cabernet and Carménère.

Chile is relatively isolated from the rest of the world with the Pacific Ocean to the West, Andes Mountains to the East , Atacama Desert to the North and Antarctica to the South. This has also kept vines safe from the previously discussed phylloxera pest.

An easy rule to remember about Chile is the rule of 75%: Wines from Chile are legally required to have a minimum of 75% of the grape variety listed on the label, a minimum of 75% of those grapes from the year listed, and 75% have to come from the region listed. It’s also worth noting that the term “Reserve” has no legal definition in Chile, similar to California.

I Have a Confession to Make…

There’s something that’s been weighing on my mind for quite some time now. Truth be told, the only reason I’m posting it here is that I was caught “in the act” by my wife; and now I’ve been shamed into telling the whole world, (or at least whomever stumbles across this website). Ok, here goes…. Whenever I’m drinking anything that I deem to be a decent bottle of wine (I deem “decent” to be most…