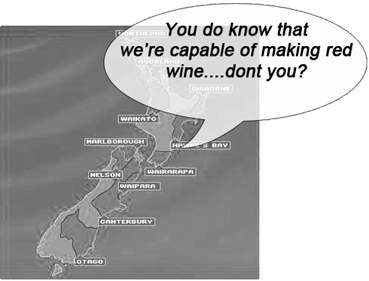 I caught this article by Lettie Teague in the Wall Street Journal a few days ago. In essence, she points out that NZ PN seem to be disappearing from restaurant wine lists and retailers shelves. She writes:

It wasn’t so long ago that New Zealand Pinot Noir was hot—or at least there were a lot more of the wines around. After all, Pinot Noir had been touted as New Zealand’s greatest discovery since Sauvignon Blanc (whose sales, by the way, are still growing by leaps and bounds).

New Zealand producers have planted Pinot Noir all over both islands—in regions like Central Otago, Canterbury, Waipara and Marlborough on South Island as well as Martinborough, Wairarapa and Hawke’s Bay to the north.

In the beginning, eager winemakers (and wine writers) heralded the early wines as “Burgundies of the South,” though the vines that they came from were often only several years old.

Competition from American wineries hasn’t been the only problem that New Zealand’s Pinot producers have faced in recent years. Adequate distribution has also been a challenge. Several wine distributors went out of business during the economic crisis of 2008-09, leaving many wineries without representation.

Click here for the full article from the Wall Street Journal.

I don’t live in New York, so I can’t speak to what Lettie sees, but I personally haven’t noticed too huge of a downturn in the prevalence of NZ PN in the market.  With that being said, I never noticed that New Zealand Pinot Noir ever had too many placements in retailers or on wine lists in the first place…but then again, I do live in Jacksonville, Florida….so let’s not use that as any kind of benchmark…

New Zealand Pinot has always been, and probably always will be, second to Sauvignon Blanc. I’m not saying it’s right, but it’s a fact.
As most people probably know by now, Pinot Noir is a fickle b*tch, in that it’s expensive to maintain and can be quite temperamental. Let’s also not forget where New Zealand is: the other side of the world! The shipping costs must be insane from these tiny islands! All these factors together mean that it’s fairly difficult to find a “decent” NZ Pinot under $20, and almost impossible to find one under $15.

To make things worse, it also probably doesn’t help that each week I see a new “California” appellation wine label released, and with the average retail on one of these wines being around $10, it’s sometimes just comes down to the budget of the wine buyer.

I slowly “came around” to New Zealand Pinot Noir a couple of years ago (about the same time I came around to Oregon Pinot). Not that I had anything against it before that time, but I was running a wine bar and I knew that most people (at least in my city) wouldn’t shell out for the wine, when they can have something they “recognize” from California for a few dollars cheaper.

It may sound harsh, but I have no sympathy for New Zealand Pinot producers. It’s not like they just woke up one morning and found themselves on a couple of tiny islands, separated from all other forms of civilization by a vast ocean. Their wines are great, but quality isn’t always the key. Marketing is the key, and the one thing I’ve learnt from talking to New Zealand producers is that marketing isn’t their strong point. Again, I have no sympathy for wineries that aren’t “marketing savvy,” particularly since most wineries down there haven’t even made any attempts at getting involved in social media. Step up your game New Zealand!

The man with the golden-palate: world-famous winemaking consultant Michel Rolland, who built his reputation on working his magic in the cellar, is now doing miracles of a different sort, by turning his South African wine into water for Ethiopians in desperate need. Recognizing this urgent need and the critical role that water plays in the production of fine wine, Michel Rolland has partnered with CNN Hero Doc Hendley, founder of Wine To Water, and Montesquieu…