Tannins; the same natural chemical found in tree bark, wood, tea, and used in the tanning process on animal hides therefore turning them into leather, is the same as what’s in your glass of Cabernet.
Tannic acid reacts with proteins in your mouth giving you that astringent-type feeling, that almost puckery-type sensation. If you’ve ever watch someone tasting a heavily tannic wine, such as Napa Cabernet or Italian Barolo, note that their facial expressions would almost indicate that they are chewing on the wine. These are tannins at work.

Tannins are found mainly in red wines, and come from the skins, seeds and stems of the grape, but oak aging of wine in barrels can also impart a certain amount of tannic acid.

In different wines from around the world you’ll find varying degrees of tannins, depending on the region where the wine was produced, the grapes used, and the winemaker. Younger Cabernet’s, Bordeaux’s and some Italian wines have a much higher tannic content and therefore benefit from extended aging in the bottle. This matures the wine and essentially lets it harmonize, letting all the different flavor components come together, and giving the tannins a chance to mellow out. 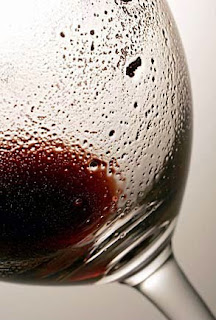 Sediment (as per the photo on the left) found in some older bottles can also be attributed to tannins. When a wine is matured in the bottle, tannins polymerize, essentially turning them into larger, more visible molecules. Sediment will start to show, indicating that flavors are changing from bitter and astringent to mellow and complex. For this reason sediment can be viewed as a good thing!

This is also where the idea of balance comes in. Tannins are key to the concept of a balanced wine, they must be at a complimentary level with other components such as the fruit, acid and alcohol, so as not to overwhelm.

If you open a bottle and you find that it is too tannic or astringent, you might want consider decanting it. Decanting or letting a wine breath softens the tannins and mellows out the wine quicker for relatively swift consumption.
Some older wines are better than others at standing up to decanting. I’ve decanted wines the night before, in order to serve them on a tasting the next day, and they were amazing! I’ve also decanted similar other wines, that I presumed would warrant decanting, and they were dead within a couple of hours. No richness, no complexity, just dead.
Don’t however do as I did in my younger more naive years as a waiter, and open a bottle and simply leave it stood for 10 minutes at a guests table, on the understanding that the wine is "breathing". This will accomplish nothing.

This is my first ever feature by an author who isn’t me! Gina Girardot Melton runs www.zestfloridafoodie.com which aims to give readers easy access to delicious food that’s a little bit off the beaten path, and miles away from the many chains and tourist traps that proliferate Florida’s landscape. Make sure you check out her site! So what’s my type? Spicy and full-bodied or complex, earthy with at touch of silkiness? To solve my dilemma,…