Who’s in the Wine Business Now? The Food Network!

The Food Network this week hosted a preview sampling of their new wine collection called entwine. A partnership with the California winery Wente Vineyards, it’s a venture 18 months in the making and scheduled to hit the shelves in August.

I have no idea why I started with this story…oh well!
I’m sure the wine will be decent, but how much more exciting would it have been to give each Food Network Celebrity their own wine! I think I might have steered clear of Paula Deen version though! 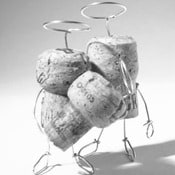 Kendall-Jackson announced it has shipped 1.75 million wine corks to 153 Anthropologie stores in the United States, Canada and the United Kingdom to increase awareness and promote the preservation of Mediterranean cork forests. The corks will be used for unique, design-rich window displays that support the preservation of cork forests and educate the public on cork recycling. The installation of the window displays will coincide with the worldwide Earth Day event on April 22.

Every little helps, I can’t even imagine how many corks are thrown away every year!

The growing trend of delivering wine to restaurants in special kegs to meet sustainability goals and cut down on costs is growing in Oregon.
Following in the footsteps of Woolridge Creek Vineyards in Southern Oregon, Willamette Valley Vineyards unveiled its "bio-cask" system last year. The recyclable kegs from German company Shäfer Container Systems can be tossed out with curbside recycling, and  cost under $30 each. Each keg holds just under eight gallons, saving the winery money on packaging, which can run from $15 to $40 per case. One keg holds just over three cases worth of wine.

I’m not going to lie, I never saw this one coming! It will be interesting to see how the market responds to wine kegs. Personally I still don’t think people have fully gotten used to screwcap wine yet, so having wine served from a keg will probably blow most peoples’ minds!

Why grapes are ripening earlier

Wine grapes are ripening earlier and new research shows it’s not just due to warmer temperatures. Viticulture researcher Dr Leanne Webb has found early ripening in 43 out of 44 vineyards in Southern Australia from Victoria to Western Australia. Early ripening could be due to 3 equally important reasons: soil moisture, heavier pruning to get a lighter crop and warmer weather.

The jury still seems to be out on whether global warming has had a big impact on wine grape growing seasons. Only time will tell, I guess.

Alaska State Rep. Bob Lynn (R-Anchorage) has proposed a bill that would allow anyone 18 years and older with a military ID to drink alcohol in Alaska.  It not only would make the law consistent with a society that sends young men and women to fight and die for their Country, but it may have long-term cultural benefits as well.

If any of you have been reading this site for long enough, you’ll know that I am 100% in support of lowering the alcohol age limit in this Country. Maybe this will be a good first step! 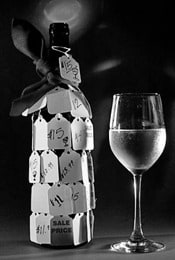 The sales ‘sweet spot’ for a bottle of wine has come down from $40 in 2009 to $15 or $20 today. Bargains are plentiful in wines from Spain, Argentina, Chile, Portugal, Italy. California winemakers are also delivering, and Syrah can be an especially good value.

I couldn’t agree more! I think $15-$20 is the perfect sweet spot for everyday wine.

Georgia communities would be able to decide whether stores can sell alcohol on Sundays under legislation headed to Gov. Nathan Deal for his signature.

The bill last month passed the state Senate, where it had stalled for five years. The governor has indicated he’d sign it.

Oh Georgia, come on! This has been far too long coming! If you can buy a gun on a Sunday, why is alcohol such a taboo subject!?!?