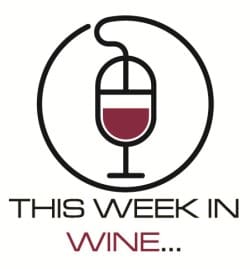 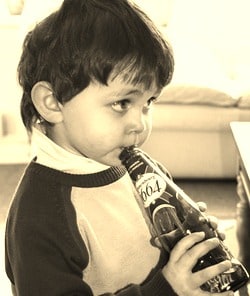 Many European parents, and some American ones, too, have long figured if they let their kids drink alcohol at home, they’d be less likely to go hog wild with their friends. But recent studies of teen drinking behavior don’t bear that out.
That’s unwelcome news in places like France, where these scientific developments are running head long into a culture that loves its wine. French government surveys show the number of French teens who drink heavily is on the rise, says Bertrand Nalpas, who heads the alcohol and addiction office at the French National Institute on Health and Medical Research.

"The age of first drink is about 12 years old in France," he says. That first drink is usually at home with the family, which has made it difficult, says Nalpas, to get out the message that alcohol can be dangerous. If kids see their parents and grandparents drinking, he says, they think, "I can drink also."

The flaw in this study is that I think it goes way deeper than parents simply letting their kids drink in their own home from an early age. I’m a big supporter of not making alcohol such a taboo subject, but it doesn’t just stop there. It needs to be coupled with an education on alcohol, both in school and from their “parental units”.
Rest-assured, I want to be the first person who gives my kid a taste of alcohol, whilst letting them know the dangers associated with over-consumption. I’ll also be keeping a careful eye on who my child is hanging out with, as I know other parents won’t be as diligent on their “in home schooling”!
People are always so quick to blame the parents when a kid is “acting up” (in one form or another); and I think that’s 100% of the problem when under-age binge drinking is put under the microscope! 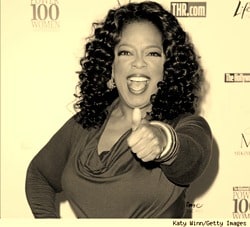 Geyserville-based Kelley & Young Wines got some good news last week, learning that its 2010 Sauvignon Blanc ($24) was included in Oprah’s “Best of” list, published in the January issue of O Magazine.
The small local winery made only 186 cases from grapes grown in nearby Robert Young Vineyards. Here’s what co-owner Kathleen Kelley Young had to say about the news.

How did Oprah hear about Kelley & Young?
One of the venues I sell our wine through is tastingroom.com, an online wine store started a couple of years ago by local Russian River dairyman turned Internet guy Tim Bucher.  They have a great line up of local wines, and we sell a fair amount of wine this way.  You’ll see that they’ve gotten many wine celebs, chefs, etc., to select their favorite wines. I guess they’ve been working on Oprah and voila!

Ahhh, the power of Oprah strikes again! <I need to be careful with what I say, as I know she’s ALWAYS listening!> You can’t deny her influence! I’ve said it here before, as I myself have witnessed the “Oprah effect” first-hand!
After she had Dr. Oz on her show a few years ago, proclaiming Sardinian wine to contain more beneficial properties than wines from other countries, I saw a HUGE amount of demand for wines from the tiny Italian island. No exaggeration, I was receiving daily phone calls for about 2 months from the date the show aired, from little old ladies truly believing it to be the fountain of youth! Craziness, but for Kelley & Young wines (whom I’d never heard of until today), no doubt they’re over the moon! 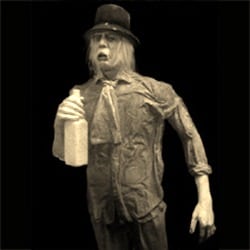 A chance of ghosts at St. Helena’s Charles Krug/Peter Mondavi Family Winery?
Not a ghost of a chance, skeptics say. But others have insisted that spirits are alive and well at Krug, most especially in the historic Redwood Cellars, which was built in 1872. Reportedly Charles Krug, founder of the first winery in Napa Valley, saw ghosts there himself.

Claims of paranormal sightings over the years have been enough to give the St. Helena winery a status as the ultimate “ghost winery” — and enough to convince Paul Englert, barely six months into his position as vice president of marketing at Krug, that this called for an investigation. He said he knows of two present-day Krug employees who have reported ghost sightings.

If you’ve got bulletproof tolerance, wine-in-a-bag-in-a-box is a beautiful thing. It’s cheap, portable intoxication. But that cardboard won’t make the cut when the Tour de Franzia gets a little more…COMBATIVE. You want your wine protected.

This chiller cask from the maker-wine-snob hippies at the20 is made from a decommissioned US Army ammo can and is designed to hold three-liter bags of wine. The idea isn’t to sell you some terrible grape nonsense that’s made in a shoe. The homegrown company developed the wine cask system specifically to keep good stuff good. The20 runs an online wine shop and club, and for a price they’ll send you a monthly shipment of some artisanal, exclusive reserve, private stock, Wine Spectator goodness packaged into flavor preserving tri-laminate sacks. $15 dollar box-o-wine for broke winos this is not: a starter package with a cask and wine costs $85-$100, and each three-liter bag costs $35+.

This would be a great addition to some dude’s “mancave”!
I don’t know if the ammo-box is quite my thing (I’ve fired a gun twice in my life), but I checked out their website, and I saw an awesome wooden version! I wish I’d have caught this a little earlier in December, and I would have asked Santa for one for Christmas! 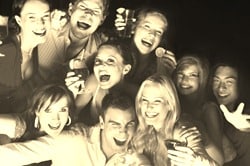 If You Want to Drink Less, Then Turn Down the Music!

Alcohol tastes sweeter when loud music is playing and the noise could make it difficult for drinkers to judge how much they are consuming, new research has claimed.

Dr Lorenzo Stafford, a psychologist from the University of Portsmouth (England), conducted the first experimental study to find out how music can alter the taste of alcohol. Dr Stafford said: ‘Since humans have an innate preference for sweetness, these findings offer a plausible explanation as to why people consume more alcohol in noisy environments.’

The expert said the research was a small-scale study, but claimed it had huge implications for those who drink alcohol in noisy environments. ‘It also has implications for bars, the drinks industry and local authorities,’ he explained.

Makes sense to me! Then again, I don’t really drink wine in club-style environments…which I guess is a good thing…as I’d no doubt be hammered after 3 songs based on this “research”…

White Balsamic-Braised Chicken with Leeks and Peas Paired with a Chardonnay Trio.

“What’s with all the recipes you’ve been making with peas? You know I hate peas!” said Mrs Chislett. This was news to me. Or maybe not! Maybe it’s just been that long since I actually used peas in cooking, that it completely slipped my mind! Peas always remind me of school dinners, with the only reason that I find myself using them again here is I had a bag leftover from the…